I am sitting, satiated at a café, El Dandy, enjoying my morning. Breakfast was delicious, I had café con leche, jugo de mango y huevos degrados (scrambled eggs) con tomate, cebolla(onion) y cilantro, with 1/4 of an avocado on the side, oh, and three little discs of toast. Cost: 7CAD. I would strongly recommend this place for flavour, surroundings and service. Cost? Well, I don’t know. The cheapster in me balks. But REAL coffee.. mm. I’ll justify it by eating 0.20CAD pizza for my one or two other meals today. 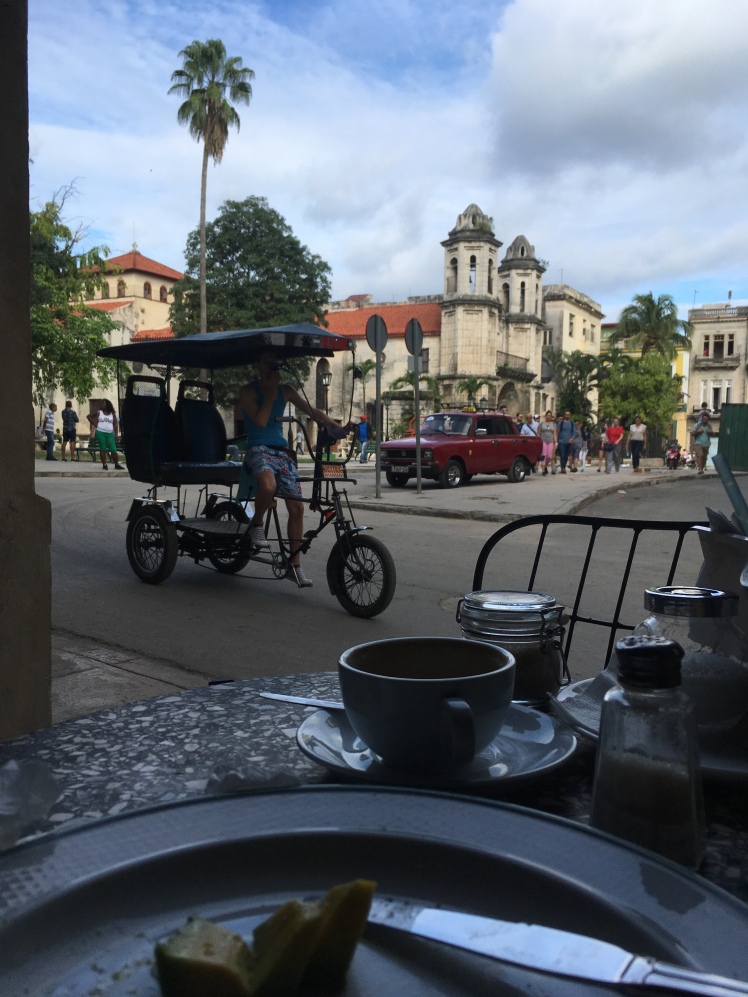 Oh, if you’re wondering about the wierd specifics and spanglish… AJ’s heading here in late February and I thought A) if she hasn’t started puttering away with DuoLingo (11/10, would recommend) then seeing some of the Spanish words for food, repeatedly, might be helpful and B) if she’s feeling at a loss for where and how to eat (my most common problem, finding what I want, if I want cheap or veggie or tasty or whatever) then she’ll have Canadian(ish??) descriptions that she can interpret in light of knowing the describer. <self-justification complete>

So today has been another day of false starts. I got up early-ish, headed to ETECSA (turns out six hours of internet lasts about two and a half days?), planning on getting another (hopefully) six cards and then doing a titch of shopping at Unico, doing a bit of picnic shopping at Harris Brothers, checking the boulevard for art and then deciding what to do until queuing for the Cabaret at Teatro Americano at 14h00. Oh, and grabbing another pan con queso for breakfast and keeping my eyes peeled for the jugo naturale all the other people at the hostel keep raving about but I have yet to try (intending on spending ~1CAD on breakfast). I suspect it’s because these vendors are selling the juice out of beaten up, highly suspect-looking 5L jugs and I just can’t recognize it as potential food. I’ll have to brave up at some point.

ANYWAY – as I slipped into the ETECSA line up I realized I didn’t bring my passport. Abort mission. For some reason this kaiboshed the entire plan and instead I decided to find somewhere to sit down and eat.

When I strolled up to La Dandy I saw the lady who had recommended it to me two days before in the ETECSA line up! We visited for a bit, much to her annoyance I’m sure. She’s from Seattle and visits Cuba every year. She’s liberal. Anyhow, my opinions about Cuba really annoy her, as she obviously prides herself on being “noble-y unjudgemental”, and I DID try and avoid saying what I thought, but she kept asking questions and I kept finding myself there. Anyway, she left and I stayed to eat and it was amicable enough. I’m sure she just thinks I’m an ignorant oaf. Which is fine. I think it’s easy to reserve judgement if you’re not the one living in squalor without the right to political self-determination.

After breakfast I browsed a few shops and treated myself a bit. I left pleased and wandered back to the hostel via different streets than usual. I’ve successfully purchased un boleto for the movie at the Teatro American. This was harder than expected, but also WAY easier than it would have been in 2015. Go DuoLingo! I have a sneaking suspicion this isn’t what I thought it was… I think it might be a documentary about the Cabaret in Cuba… which… given that it will be in Español may be way over my head. But! Only one way to find out! I’ll admit I’m feeling way more relaxed than I have in days. Not sure why the change but I am grateful.

OH MY GOD I forgot my tour of the Teatro Nationale. Beautiful. If I ever come back to Havana I will DEFINITELY get tickets. Somehow. (AJ, for the love of Pete get tickets and go. Maybe your AirBnB person will pick them up for you? It seems like they are not a “buy at the door” item) 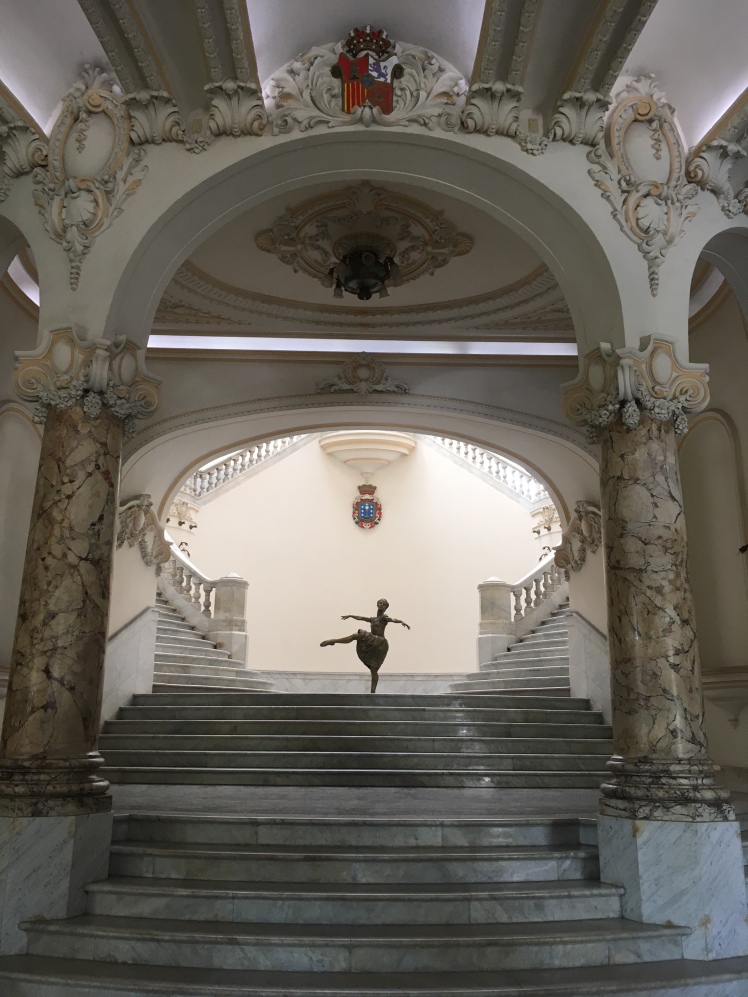 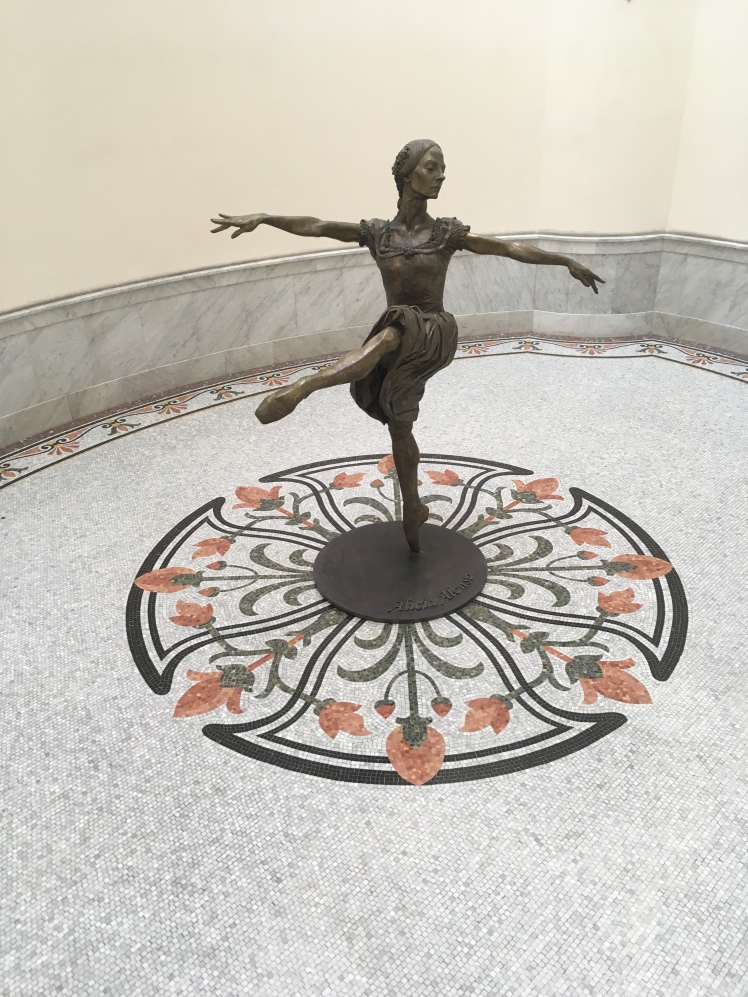 So when I bought the ticket I noticed that the guy had written tomorrow’s date on it.. I verified twice with him that the ticket was for today and left it at that. When the doors opened thirty minutes later, the Entrance Master attempted to kick me out. But I was able to say that I knew the ticket had tomorrow’s date, and that the man in the green shirt said today. No one spoke a lick of English to me, and I had to substitute the occasional English word, so if they had much English they would have Spanglished me back. All that to say that obviously I had enough Spanish to sort it out BEFORE anyone got mad at me!

The documentary was pretty neat. It was a “Save the Whales”-type documentary, in this case the endangered animal was the Cuban Cabaret. I intended to comment that most of the other attendees seemed to be aging Cabaret [drag]Queens and Princesses; I had no idea how close I was! The documentary interviewed past Tropicana stars and each time a new one appeared on-screen, a cheer would erupt. At some point I realized I was recognizing some of the interviewees from the crowd of people as I was entering! Pretty cool, if you ask me.

I’m currently hunkered down on a (parapet?) of the Spanish fortress across the bay from Havana, awaiting the ceremonial cannon blast at 21h00. 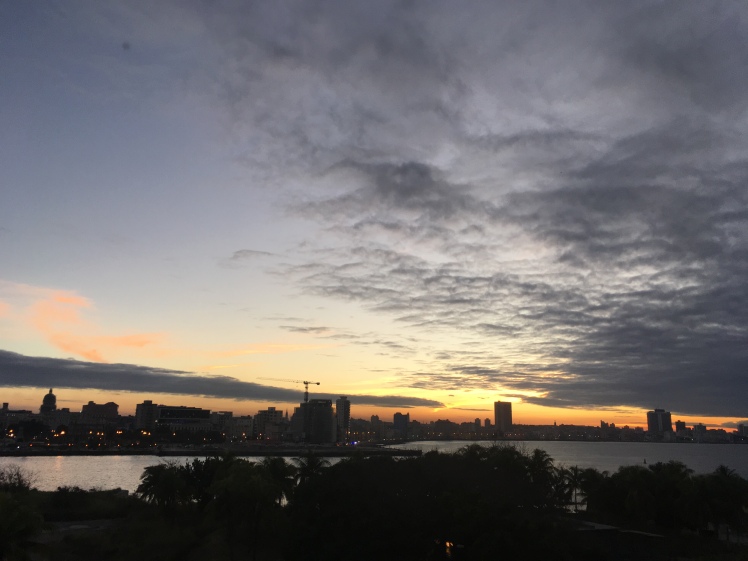 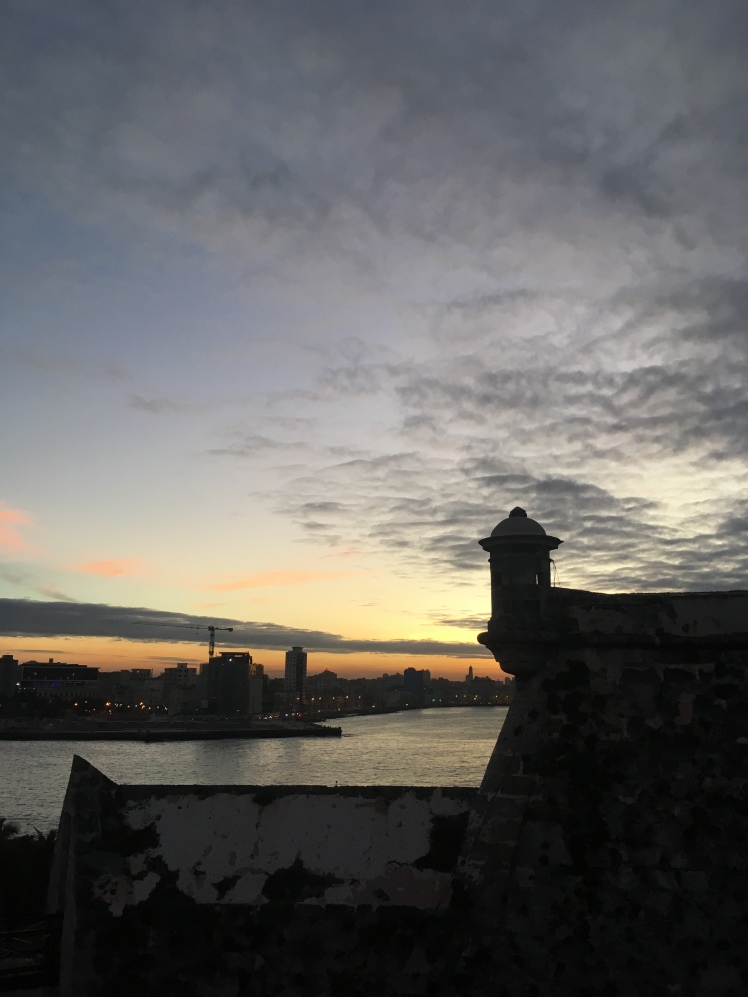 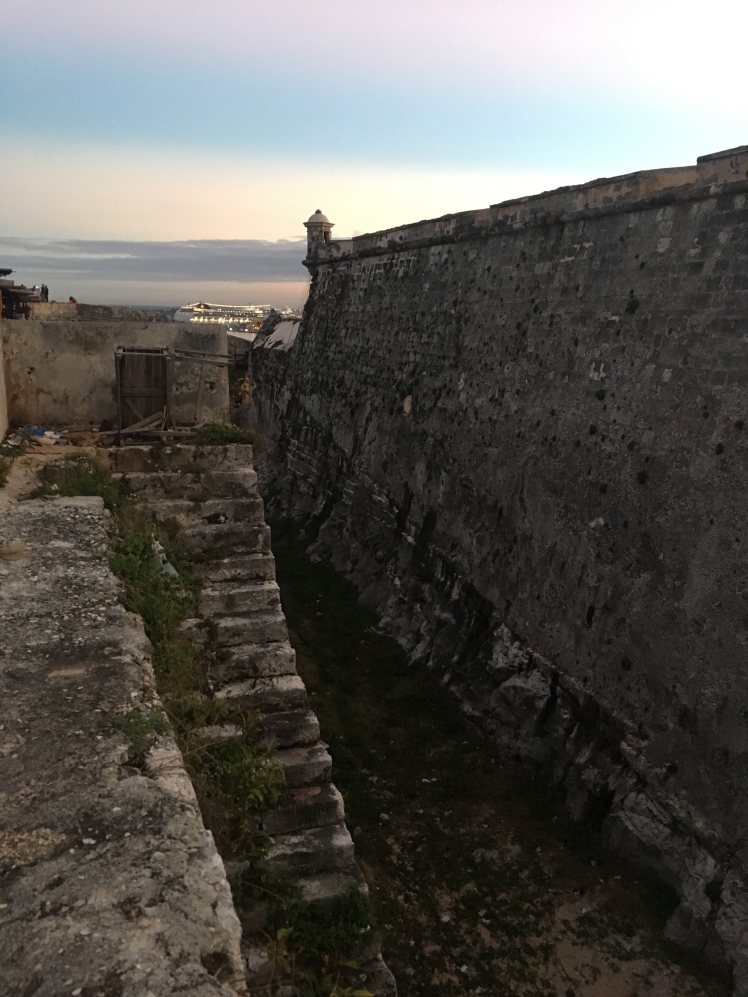 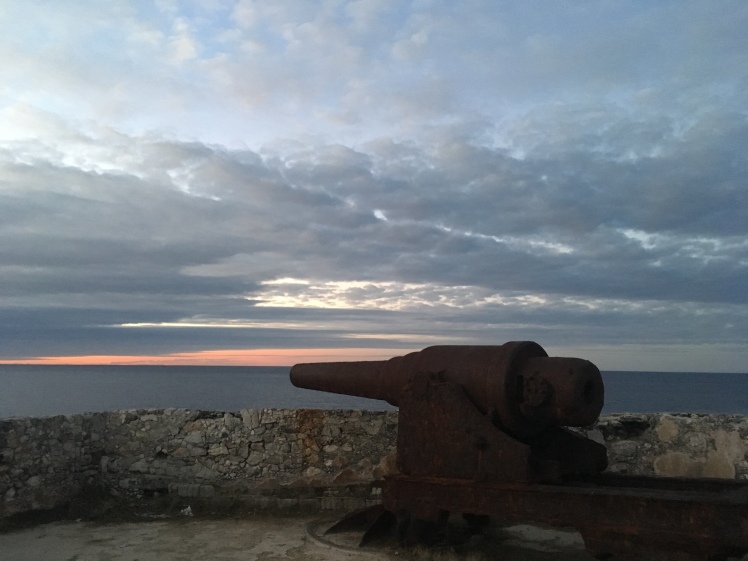 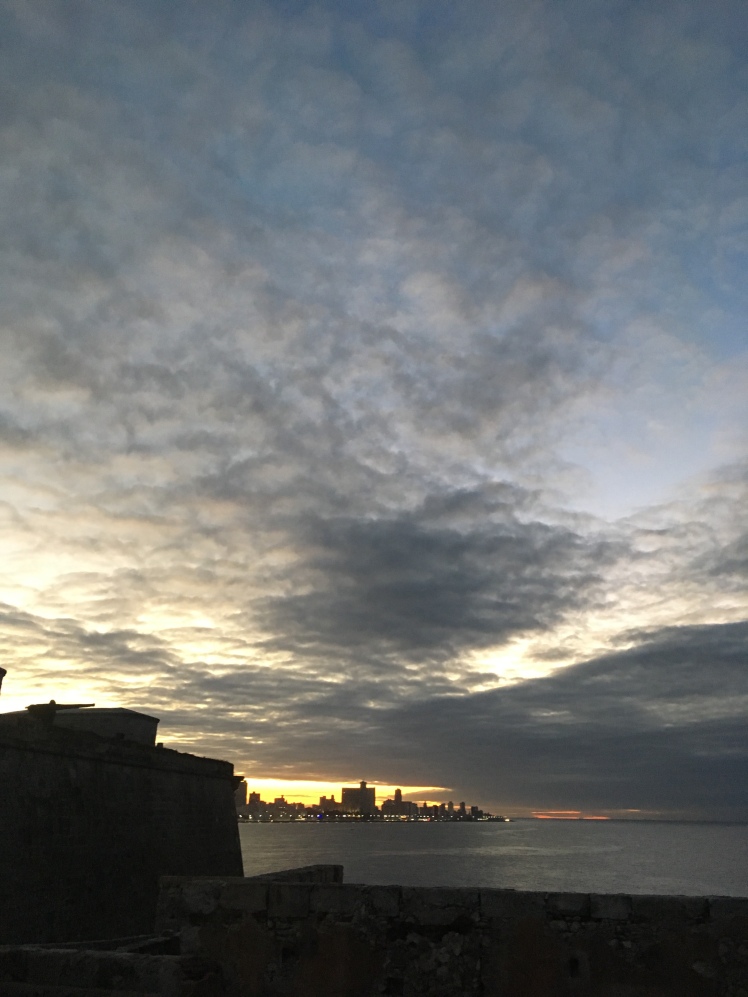 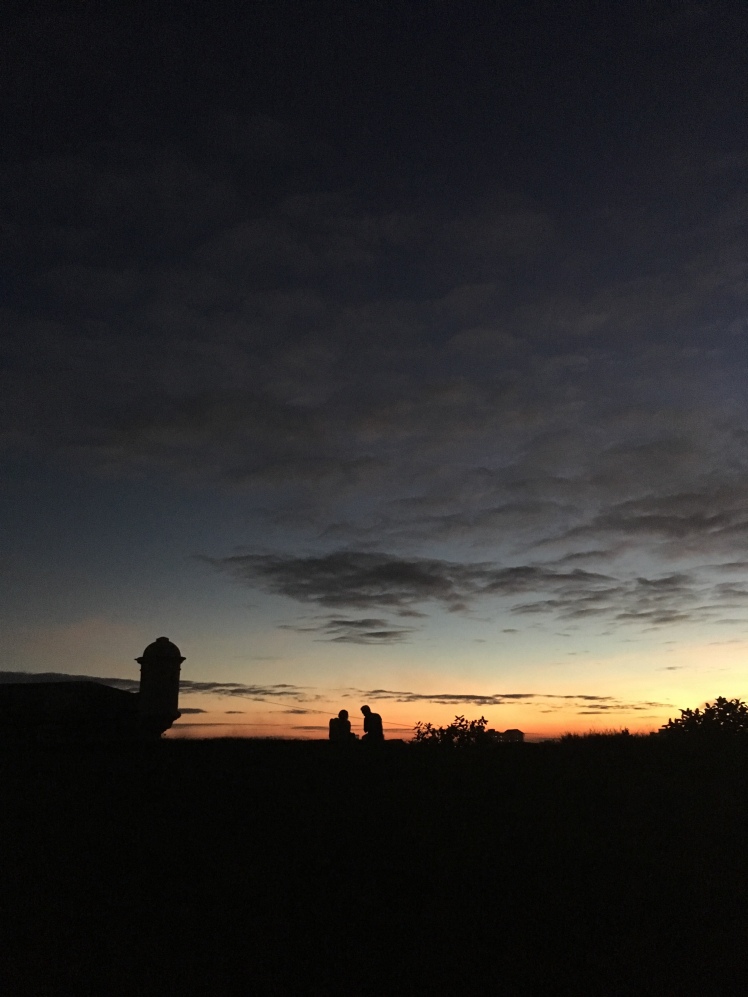 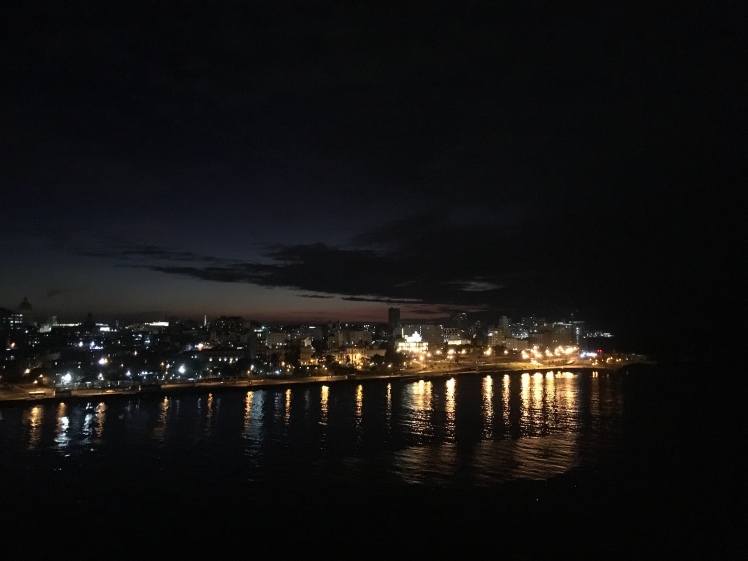 I pulled a classic Melissa with this one. So, I quizzed my hostel person, (my personal font of information on all things Havana, and many things Cuba), about how to get to the fortress and how to come home again. He recommended the city bus to, told me it was 5 cents, and to catch the A95 or A58. He told me to take a taxi back, just to get through the tunnel, and that I shouldn’t pay more than 5CAD. Right, so I scrounged around for 5 cents, couldn’t find any, asked if he had change. He searched around and gave me the 5 cents, (this fact is important later). Okay, so then I went and got 10CAD(CUC) and, gripping my 5 cent coin tight (it’s small and easy to misplace) I headed for the bus stop. The bus rolled up, I queued to get on, and when I went to pay, the guy kitty-corner to me (Cubans are abysmal at queueing) waved my coin away and gave the bus driver one bill and it seemed to pay for both of us. Two thoughts crammed through my head at once: did I not have the right fare?? And, is this dude going to proceed to be a grade-A creep and feel like it’s his right?? I’ll never know about the fare, but for the record, he was just being a nice person. He passed right by me on the bus, didn’t touch or talk to me, and just nodded a bit when I caught his eye as I got off and mouthed gracias. Anyhow, all that feels a bit minor because the Melissa-style bit is coming up here. I had brought a 10 to get me home. I’ll admit I would have brought a 5 if I’d had one, but I didn’t, thank god. I also had my little change purse with CUP (moneda nacionale) in it, intending on grabbing my second meal of the day (it’s 19h18 at this point and breakfast was ten hours ago). WELL, as I walk up to the fortress I realize there’s a bloody entrance fee. FUUUUUU… I now have 2CUC. The taxi home is 5CUC. I hurriedly count my CUP, 130. Divide by 25 = 5.2. Okay. I can pay for the taxi, provided I’m not given a hard time for paying with CUP AND provided I can get it for the prescribed price (which is never guaranteed). And I certainly CANNOT get food.

Saltines and water never tasted so good. Word to the wise, when they say “butter and salt” (mantequilla y sal) flavoured, it’s no joke.

Anyhoo – Cañonazo wrap up? Meh. I’d go to the fortress, for sure. But I’d probably go in the afternoon for sunset then leave. Better photos, beautiful place to watch sunset over Havana, and you’re not stuck there till nine, just to watch nine guys in poor costume walk about, yell, make out like they’re going to fire the (one!) cannon a few times until they finally do.

Oh. And I took the bus home for poverty reasons. No reason not to, there’s a pile of people that head to the stop.

One thought on “Day Fifty-Eight – Relaxing into Cuba (finally)”