And in a proper hostel! With a pool! And internet! And a stove!

… and a load of mosquitoes, not very many other other people and a not very friendly-seeming owner.

But! After the cement bunker in the middle of nowhere with no internet.. this is a welcome relief. 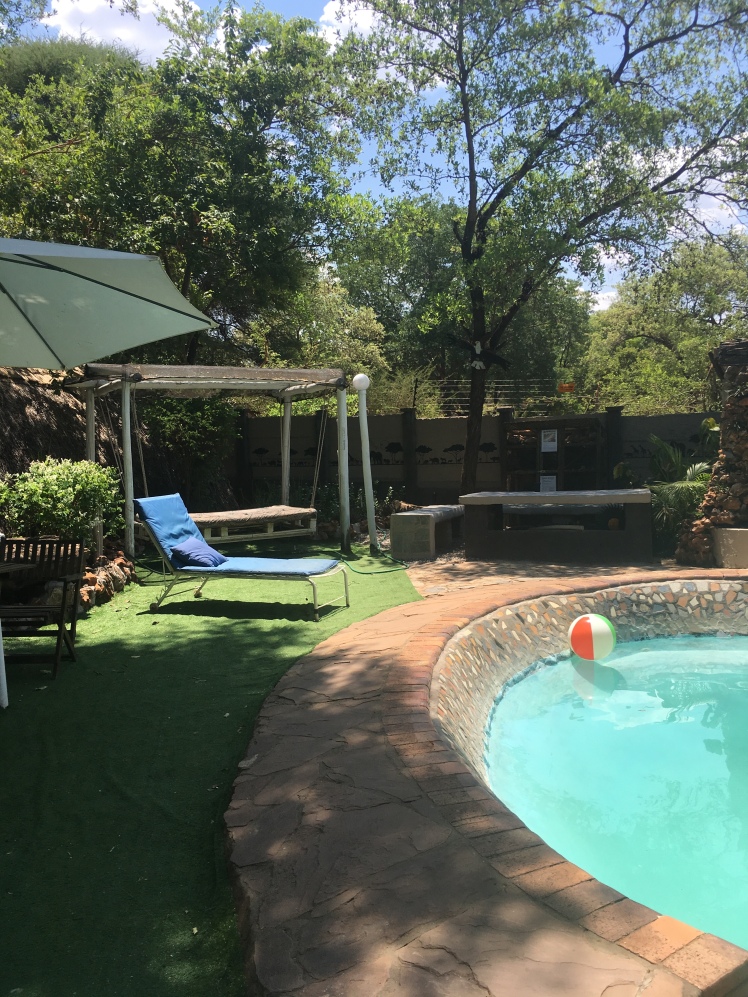 Home Sweet Home for the next five days! Tomorrow is walking the Falls and booking any other activities for the other days (considering white water rafting and the Devil’s Pool) and after that, relaxing. The rains are supposed to start Friday, so it may be a case of sitting about and reading, but I’m okay with that.

Crossing the border was actually uneventful but between border jitters and taxi angst, I’m sure I sprouted an extra grey hair or two.

The host of Poiviruuo drove me to the border. He confirmed with a guy that it would cost 7USD to take me to Victoria Falls and, after seeing me safely into the surprisingly long line up, left me to the winds of fate around 8AM. I mention the time for two reasons: wow was the border busy that early and wow I was dangerously hot after standing in the sun for less than 40 mins. It definitely occurred to me to wonder if they had a Standard Operating Procedure for “Gringa Passes Out in Line”.

While getting good and broiled in the sun, I was approached by multiple people, (many of them uniformed, and let’s be honest, every single one was male), and asked if I was alone. Nice one guys, really makes a girl feel comfortable to be admitting in a crowd that she is alone, with all her possessions (and passport and finances, more to the point) strapped to her back. Anyhow, vultures.

I did end up getting into an unmarked vehicle with a guy (smart!), but I asked him beforehand how much the ride would cost, (“our economy is so bad, you just pay me what you want”) and there was another woman (local) in the car… so I would say I’m collecting some savvy. To no avail, however, as when we pulled up at my hostel and I tried to pay him 10USD (three more than I was told and five less than the guides who wanted to take me in their air conditioned minivans..) he assured me it cost 15USD. I weakly pointed out that I was told it was seven and when he said that is when there are other passengers I felt too annoyed and defeated to argue that I’d suggested waiting for other people and he’d chosen to go, that he had said I could pay him what I wanted and that there WAS another passenger. So congratulations buddy, you steam rolled another gringa. Leaves a bad taste in your mouth – you know?

The host at my hostel gives off a decidedly unfriendly air, so I walked down to Shoestring Backpackers for supper. 5USD for a “traditional Zimbabwean meal” = papas, beef stew, and some sort of stewed green salad/vegetable situation. Was delish.. don’t know about cheap.

Thanks to maps.me for allowing me to traipse confidently around Victoria Falls, even on my first day!