Funny how things work out. If I’d known, coming into Bolivia, what I know now, I would have started my exploration in Cochabamba, and worked my southwest. Likely I would be heading out on my Uyuni tour today, San Pedro bound. Skipping Oruro would have been for the alright, and who knows, maybe I would have found travellers I liked to fall in with. Fate was trying to take care of me.

Ah well, here I am now, seated at a pleasant sidewalk table at a restaurant called Sucremonte, enjoying sunshine, guitar music, delicious food and pretty good beer. Breakfast on the bus from Toro Toro consisted of Frac cookies, an apple and water, blech. Lunch! On the hand was a cream soup from chicken and two other meats I couldn’t translate or identify during consumption, and the over-sized, far more fibrous corn kernels found here in South America. My description does not do it justice, and I didn’t take a photo before devouring it. My beer, a “cerveza negra”, is delicious although I admit I may not be able to finish all 620mL that is the standard bottle size.

I’m staying at Running Chaski again tonight, have a bunch of blogs to catch up on, and my journey to Uyuni to plan and then I’ll be off tomorrow on whatever plan I make today!

There, future travellers be warned. 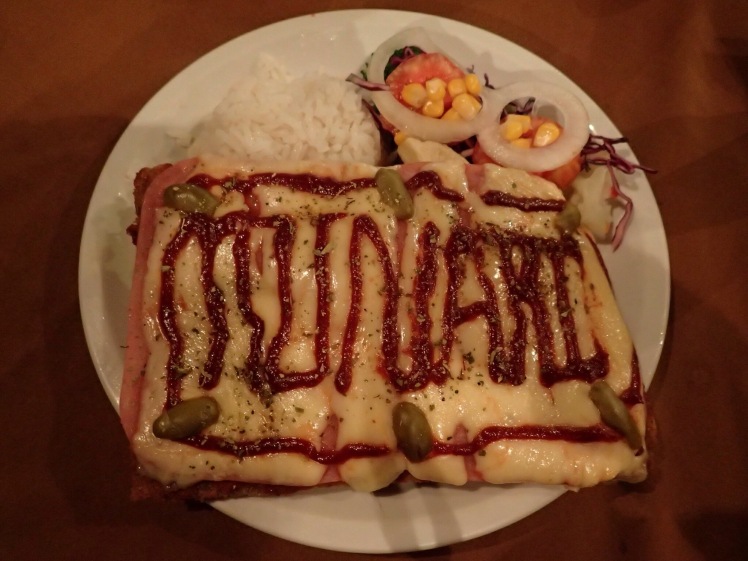 Addendum: I ate at Tunari restaurant for supper. The food was delicious, the service abysmal and a very sobering thing happened when I was finished my meal. A boy, (anywhere from 12 to 19), mentally handicapped in some way, came through the tables attempting to sell small packages of Kleenex. When he got to my table, I said No Thank You, and he lowered his bag of goods. He did not, however, move on. He stood there and put his hand to his mouth, and looked at my half full plate, which I was obviously finished with, having put a used tissue on one side of it. My initial reaction was half disgust and half pity. At first I pretended not to understand him and looked around for a waiter to deal with the situation. Then I was flooded with utter shame. What the hell is wrong with me? I motioned for him to sit and pushed the plate at him. I admit I didn’t try to talk to him, for a multitude of reasons, but we sat, companionably enough, I thought; me sipping my Fenet and Coke and him devouring my leftover French fries and rice. After awhile, I noticed that he was meticulously removing the scraps of cabbage I had let mix in with the rice, and I quietly, (I thought), chuckled to myself. I was thinking how carb-crazed the Bolivian people seem to be. He looked up at me, (honestly, I was silent, he picked up on the slight irregular movement of my chest; reminding me of the way a street dog is sensitive to the slightest shift of one’s weight or the twitch of a muscle that could control a foot, a leg or an arm), and made to leave the table, I said No, No, Finish, and waved him again at the seat and nudged the plate again in his direction. He lowered himself hesitantly, and took one more waivering bite, then got up and left. I felt so sad and ashamed I had scared him off his meal, I see it still brings me to tears.